Wondering if the temperature of your water affects digestion? Here's the answer. 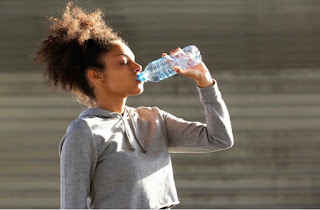 
Recently, I ordered a glass of ice water at a bar and was met with palpable disdain from my dining companion. “Why ice water?” he asked. “Cold water isn’t good for your system.”
This particular friend’s mom is an Ayurvedic practitioner, so it made sense that he was of this opinion as drinking room temperature or even warm water is recommended within the ancient Indian tradition. And though I love Ayurveda, I love cold water more—so, I decided to investigate his vague claims around its effects on my “system.”
First and foremost, Ayurvedic practitioners—as well as practitioners of Chinese medicine—believe that water temperature impacts digestion. “Cold water actually slows down the entire digestive system by constricting blood flow to the stomach and intestines and slowing enzyme secretion, which in turns causes lymphatic stagnation and a slower metabolism,” says Surya Spa founder Martha Soffer. “Room temperature and warm water, however, have the opposite effect, helping increase circulation to your digestive system and stimulating your ‘agni’, or digestive fire.”
While I couldn’t get any Western digestive experts (read: MDs or researchers) to weigh in on the subject—there appears to be a dearth or research on the topic—I did find one study which could support the theory that warmer liquids aid in digestion. In it, patients with functional dyspepsia—a condition wherein the process which moves food from the stomach to the small intestine is slowed—were given meals at varying temperatures, and the results showed that the hot meals “significantly accelerated gastric emptying.” This is far from conclusive proof that warm liquids would have the same effect—and on “normal” patients—but it suggests there may be something to the ages-old practice of shunning cold water.
Soffer tells me that water temperature is key for another reason, too. “Room temperature and warm water are also absorbed more quickly into your system, which means they keep you more hydrated throughout your day,” she says; however, Western medicine may offer a different perspective on this one. According to Go Ask Alice, a resource from Columbia University, coldwater actually leaves the stomach faster, allowing for faster rehydration. In fact, the American College of Sports Medicine recommends that water ingested before, during, and after exercise or athletic competition be cooler than room temperature (e.g. < 72 Fahrenheit), a position that is backed by research.
Torn? You might try drinking room temperature water with and around meals and cooler water after exercise to see how you feel. But really, it might not matter all that much one way or the other, says sports dietitian Marie Spano, MS, RD. “Drink whatever temperature you like,” she says. “It doesn’t matter that much unless it encourages you to drink more.”

Link to the article on Good Food